Home>Posts>Politics>Mehdi Hasan: A conscience for hire

Mehdi Hasan: A conscience for hire

Mehdi Hasan’s rise to prominence has been welcome in Shia circles. However, his association with the Qataris has come at a price.

When Mehdi Hasan first rose to prominence around a decade ago, many in our community cheered. Here was an intelligent, articulate, Oxford-educated Shia who had somehow managed to penetrate the tangle of ethnic and cultural prejudice to reach the heart of the journalistic establishment. Best of all, he still seemed to have retained a radical voice, speaking truth to power and calling out the hypocrisies of the War on Terror.

Sadly, that early promise has not been fulfilled. Whilst Hasan’s brusque, combative style (copying that of veteran British journalist Jeremy Paxman) gives the impression that he is pushing a counter-narrative, his substance is little more than a lightly spiced version of the mainstream media’s Shia Phobic take on the ongoing conflict between Deobandi/Salafi/Wahabi militancy and those who refuse to capitulate to it.

The turning point for what was once a promising career as a truth-teller came in 2009, when he delivered a lecture in which he used the phrase phrase “cattle” to refer to non-Muslims. What followed was undoubtedly an anti-Muslim witch-hunt, led by the Inquisitor General of the New Atheists, Christopher Hitchens  and there is no doubt that Mehdi’s position was sound from a Quranic perspective. However, the impact that the controversy seems to have had on him was not to strengthen his resolve to keep challenging the established narrative. Instead he has spent the last eight years ensuring that his career is never again threatened by an attempt to report things as they actually are.

Nowhere is this more obvious than in his unconscionable stance on the sectarian genocides taking place against Shias across the Muslim world. Here are some of the techniques he uses to make it seem as if the side doing the killing and the side doing the dying are equally to blame: 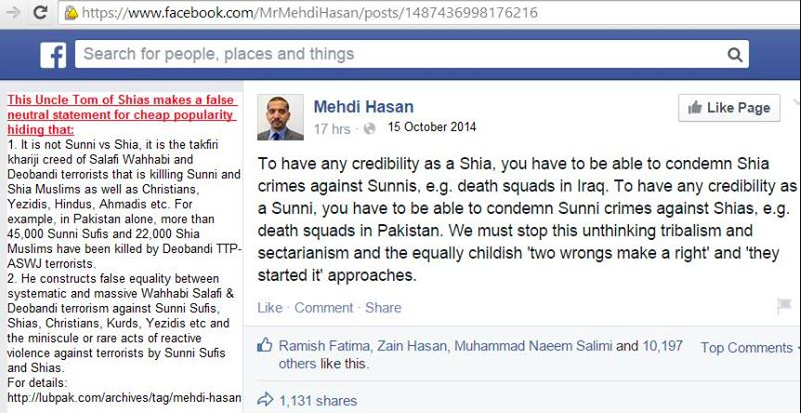 How would any Muslim, or anti-imperialist react if we reframed that quote in terms of another conflict:

There would be outrage, horror even, that anyone was callous enough to make the comparison. But in a world where the history of the persecution of the Shia is not known, Mehdi can get away with this disingenuous approach.

2. Victim-blaming
The above quote also contains a healthy dose of victim-blaming. By deliberately obscuring the context of the persecution of Shias and other minorities by Deobandi/Salafi/Jihadi extremists, Mehdi makes retaliation and self-defence seem as bad as the initial acts of violence. Imagine an abused wife being told that she is as culpable for hitting back at her husband because “it doesn’t matter who started it.” That is exactly the argument Mehdi uses in his pathetic attempt to keep everyone happy whilst still appearing to maintain his hard-hitting persona.

3. False-framing
Of all the disingenuous techniques Mehdi uses, false-framing of the conflict is by far the most dangerous. In this two-minute video, he vehemently denies that there is a sectarian dimension to events taking place in the Middle East, instead referring to the turmoil as a geopolitical struggle between Iran and Saudi Arabia.

This is appalling because there is a very obvious sectarian dimension to the conflict: a sect of Saudi-funded and inspired jihadists is committed to wiping Shias (along with Christians, Alawites, Yazdis and others) off the face of the earth. Whilst there have been instances of sectarian violence going in the other direction, there is no equivalent creed aiming at the annihilation of Sunnis on the part of the Shia.

4. Refusing to name the culprits
In the video Mehdi frames the conflict as a Sunni/Shia one even as he rejects the idea that it is sectarian. This is an ancient rhetorical technique known to the Greeks as Apophasis (affirmation by denial) and a regular refuge of the dishonest speaker. The reason it is such an unpleasant trick in this case is because framing the conflict as Sunni/Shia only makes it seem like a two sided tit-for-tat rather than a one-sided persecution, it also puts ordinary Sunnis onto the same side as the extremists, forcing them to shoulder the blame for the actions of the unhinged few and actively bringing the fringe ideology of the extremists into the mainstream.

These techniques are just a taster of what this increasingly seedy propagandist is capable of. Recently he gone ever further. On Monday 6th March he posted on his Facebook wall an attack on Rep. Tulsi Gabbard, one of the few American lawmakers who has challenged the Washington orthodoxy that Al-Nusra and Al-Qaeda are ‘moderate rebels’ in Syria and should be armed to bring down Assad. His attack includes a link to an article which attempts to connect Tulsi (an American-Samoan who converted to Hinduism as a teenager) to the Indian Hindu nationalism of Narendra Modi’s BJP.

Even if we leave aside the inherent racism of such a claim (Mehdi has more than once cried foul when faced with the equivalent attack – that he must have a pro-Iran bias because he is a Shia), the attack on Gabbard came the day after she spoke at an event where Hasan was also present. What did she say? Everything that he will not – that the violence in the Middle East and elsewhere is sectarian in nature; that it is perpetrated by extremists who are given funding and ideological support by countries that the West is happy to ally with and that before we can challenge it we must call it by its true name.

That name is not Muslim, it is not Sunni, it is Deobandi/Salafi/Wahabi, and the fact that Mehdi has attacked Gabbard for saying this reveals him to be the worst kind of sell-out –one who knows he sold his soul and fears he may have got less than market value for it.