Home>Posts>Politics>ISIS, Al-Qaeda and Israel: The Friendship that the Western Media Ignores by Alamdar Khadr

ISIS, Al-Qaeda and Israel: The Friendship that the Western Media Ignores by Alamdar Khadr

ISIS and Israel: For years Israel has been supporting extremist Wahhabi terrorist organizations like ISIS in order to get back at Iran and sow chaos in the Middle East.

On April the 22nd 2017, former defense minister of Israel, Moshe Ya’lon, admitted a tacit military alliance between the current hard-right Israeli government and ISIS. Ya’lon said that ISIS’s Golan Heights branch, the Khaled Bin Waleed Brigade, had briefly fired at Israel back in November of 2016. Ya’lon then admitted that ISIS immediately apologized to Israel for the attack.

ISIS is not the type to apologize to anyone. It is a brutal terrorist organization dedicated to overthrowing any semblance of human civilization. In fact, ISIS did not even apologize to Al-Qaeda in the initial phases of its friendship with the terrorist group when they were fighting the Syrian government together.

The fact that ISIS apologized to Israel is indicative of a deeper strategic alliance between the two entities; namely that ISIS sees Israel as important for its interests and does not want to jeopardize the alliance. Similarly, Benjamin Netanyahu sees Al Qaeda and ISIS as strategic to its own interests, which is why it continuously comes to the aid of these terrorist groups by attacking the positions of the Syrian government and its allies, as it happened a few days ago.

So what explains this weird friendship? The answer lies in their common enemy: the Bashar al-Assad, Iran and Hezbollah axis. Israel’s hard-right government’s main opponent in the region is this axis. For ISIS, the axis is a Shia heretical group that stands in its way of dominating Damascus, Lebanon and beyond (except for Israel of course, at least for now).

Israel’s hard-right government’s alliance does not just stop with ISIS, it extends all the way to Al-Qaeda and its affiliates in Syria and Lebanon. As the Jerusalem Post reported, the UN nations has revealed documents showing that Israel is working closely with terrorist rebel groups (aka Al-Qaeda) in the Golan Heights.

JPost admits that the document reveals that the help goes beyond just treating the wounded. It says:

The documents show that Israel has been doing more than simply treating wounded Syrian civilians in hospitals. This and a few past reports have described transfer of unspecified supplies from Israel to the Syrian rebels, and sightings of IDF soldiers meeting with the Syrian opposition east of the green zone, as well as incidents when Israeli soldiers opened up the fence to allow Syrians through who did not appear to be injured.

See the following article for a more in-depth look documenting Israel’s cooperation and alliance with ISIS and other Wahhabi extremist groups.

Israeli TV even aired an interview with an Al-Qaeda affiliate fighter who was being treated in Israel. Arab news channels were quick to pick this up, as you can see in the following video:

However, Western news channels have mostly been silent about this.

The Israeli hard-right government has a long history of supporting Salafi militant organizations in the region. It began with Hamas when it wanted to use it to subvert Fatah in the Gaza strip. It then continued to support the Syrian Muslim Brotherhood whose head, Ali al-Bayanouni, as a response, suggested that the terrorist organization would recognize Israel if it were to withdraw from occupied territories.

As of today, since the beginning of the terrorist-instigated disaster in Syria, Benjamin Netanyahu’s government has acted as the de-facto air force of ISIS and Al-Qaeda in Syria. 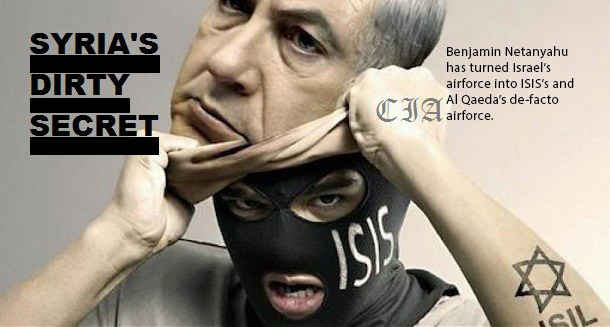 Like ISIS, Al-Qaeda and the Muslim Brotherhood, Israel shares one ultimate enemy, namely Iran, Hezbollah and the Syrian government. The Israeli hard-right government is willing to go to any lengths to combat this enemy, even allying itself with terrorist organizations that have been responsible for the murder of thousands of Americans (America being Israel’s #1 ally,) including the 9/11 tragic attack on the Twin Towers. This is also despite the fact that Al-Qaeda has sometimes targeted Israeli civilians. Take for example the Al-Qaeda/ISIS affiliate Lashkar-e-Taiba’s (Pakistan-based terrorist group) attack on a Jewish center in Mumbai, India back in 2008 where Israeli civilians, including a pregnant Israeli woman, were killed.

Despite the treasonous behavior of the Israeli hard-right government against its own Jewish citizens and the United States, Western news outlets continue to ignore this link between the Israeli hard-right government, its military and Wahhabi terrorist organizations. To put salt on the wound, Western media outlets relentlessly demonize a Syrian government who for years has been protecting Christians from a Wahhabi sponsored genocide in the Middle East.

The irony lies that in as much as Western media outlets cry foul at the slightest hint of anti-Semitism, or Holocaust denial, they are conspicuously silent about Israel’s political and military alliance with vehemently anti-Semitic Wahhabi terrorist organizations who would like nothing more to kill off Jewish men and enslave their women, much like what was Yazidis in Iraq continue to suffer from to this day.