When even an Establishment Rag like The Guardian publishes against an Establishment Democrat like Biden, you know it’s not looking good. Jimmy Dore said it much better in this 2 minute clip than many others.   ﻿ Here is a relevant quote from article. FYI, the Obama administration supported Neo Nazis in Ukraine. “He’s […] 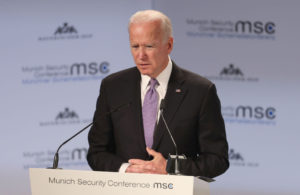 Jimmy Dore said it much better in this 2 minute clip than many others.

Here is a relevant quote from article. FYI, the Obama administration supported Neo Nazis in Ukraine.

“He’s not offering progressive policies like Bernie Sanders or Elizabeth Warren. His is the vaguest and most centrist of battle cries: let’s go back to, you know, “all those good things”. Let’s go back to a time where racism was a little more polite and white people could pretend America was a post-racial society. Let’s fight for the soul of America by pretending that Trump is the problem, not just a symptom of the problem. Let’s pretend that Charlottesville was a direct result of Trump – an aberration – and not a product of a racism that has always existed in America. Let’s rewind the clock a few years to when everything was just fine and dandy.”

“In short, a Joe Biden nomination would likely be a disaster, alienating the same voters who deserted Hillary Clinton in 2016, while running on a similarly lackluster platform. The only thing that could be more harmful is a Joe Biden presidency, which, to take him at his word, would see the former vice president collaborate with an increasingly extreme GOP in an effort to achieve some of the Right’s most long-cherished goals, including paring back the last remnants of the New Deal. Even scarier is the likelihood that such a disillusioning presidency could subsequently pave the way for a far-right populist even more virulent — and competent — than Trump.”

Fear tactics like “Vote for Hillary or you will get Trump” failed in 2016. If Biden-Buttigieg-DNC cheat the progressives in 2020, the same fear tactic will backfire again.