Three men have been found guilty of committing a terror attack on a Melbourne mosque. Editor’s Note: This evidence yet again proves that the Takfiri Wahabi Salafi and Deobandi (WSD) groups are not only an enemy of Shia or Sunni Muslims but also the enemies of Christians and Jews as Well. These groups not […] 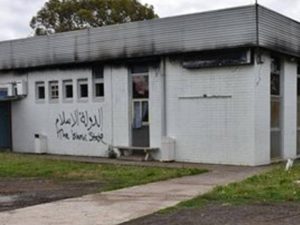 Three men have been found guilty of committing a terror attack on a Melbourne mosque.

Editor’s Note: This evidence yet again proves that the Takfiri Wahabi Salafi and Deobandi (WSD) groups are not only an enemy of Shia or Sunni Muslims but also the enemies of Christians and Jews as Well. These groups not only Attacks Shias and Sufi Sunni Muslims but also have been involved in planning and executing terrorist acts against Christians and Jews. These groups are the enemies of every Believer and non Believer alike. They are the enemies of Humanity.

Two convicted terrorists who plotted a Christmas Day attack on Federation Square have also been found guilty of firebombing a Melbourne mosque along with a third man.

Abdullah Chaarani, Ahmed Mohamed and Hatim Moukhaiber were on Thursday found guilty of engaging in a terror act for burning the Imam Ali Islamic Centre at Fawkner in December 2016.

Mohamed and Chaarani were also found guilty of attempting to commit a terrorist act over a failed first attempt to attack the mosque on November 25 the same year.

Screams and yells from Moukhaiber’s wheelchair-bound mother forced the Supreme Courtroom to be closed after the jury verdict was revealed.

“You are dogs,” she yelled and “what are you doing?” at court officials before she was ushered out.

The outburst prompted her son to slam his fists down and call the jury “f***ing dogs”.

A lawyer for Moukhaiber apologized to Justice Andrew Tinney for her client’s behavior and said it was “distressing” for him to see a family member upset.

After the jury returned to court, one juror dabbed her eyes with a tissue and Justice Tinney told them “emotions are high”.

Mohamed and Chaarani have previously been convicted of planning an attack targeting Federation Square, St Paul’s Cathedral and Flinders Street station on Christmas Day in 2016.

They were among five men found guilty in November last year after the plot was foiled by police who listened to their plans and watched their reconnaissance at Federation Square.

The trial linked to the mosque fire lasted for weeks with Mohamed and Moukhaiber denying any involvement, while Chaarani admitting he took part but claimed it was part of a protest, not terrorism.

“He did so with the intention of advancing a political, religious or ideological cause, namely the advancement of Sunni (WSD) Islam,” Chaarani’s lawyer said during the trial.

But the prosecution successfully convinced jurors the firebombing was a terror act and all three were involved.

“It is a clear indication that those who attacked the mosque and destroyed it were branding it as action … supported by Islamic State,” prosecutor Nicholas Robinson QC said in his closing argument.

He added that the Shia mosque was targeted to intimidate Shia Muslims, therefore constituting a terror act.

After the first failed attempt to burn the Fawkner mosque, Mohamed and Chaarani returned with Moukhaiber on December 11 with a 20-liter container of petrol and two tires to keep the blaze going, jurors were told at the trial.

The words ‘Islamic State’ were also spray painted on the exterior of the building.

The fire almost completely destroyed the mosque. No one was injured.

The jury had been deliberating on the trio’s fate since Tuesday.

The men are due back in court next week ahead of sentencing.

Mohamed and Chaarani are yet to be sentenced for their involvement in the Christmas terror plot.