Recently, both the Muslim Congress and UMAA simultaneously hosted their events on July 5tht to 7th. Both events were poorly attended given the size of the North American Shia populations. Unfortunately, community dynamics have placed North American Shias in a very difficult space. 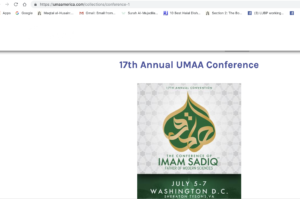 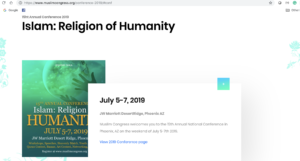 Unlike other faith communities and the larger Muslim community, North American Shias are divided and constantly involved in petty infighting. They have effectively been reduced into two binary extremes. Rather than coordinate with one another, they continued their intra-Shia war. Their attendance is about a tenth of what it was when they started and there is not much hope left with either of these two organizations.

On the one hand, there is UMAA whose genesis was deeply flawed, while Muslim Congress has an equally flawed genesis with a mission to promote counter agendas. The losers in this rivalry are the Shia Muslims of North America whom, these organizations claim to represent.

One extreme in this disappointing intra-Shia divide one side is intent on supporting the pro-war agenda. The United States has suffered due to horrific Neocon and Neo-liberal misadventures in places like Iraq and Syria.  Meanwhile, the other side continues to support extremist foreign clerics who promote misogyny, intolerance and a foreign agenda in the United States.

The Oligarchical elites that control Shia organizations have failed in providing thought, vision, and action that is required by North American Shias. Whether they are controlled by an oligarchy of clans or clerics, their abject failure stems from systemic dysfunction in overall organization and management of the community’s trust.  Shia organizations in North America have failed to attract youth leadership. They lack transparency and fail to publish their funding data. Boards are often selected and not elected.

In the case of UMAA, it is well known to be run by President Ehtesham Abidi and the brothers Rahat and Azmat Hussain, who are also employees of Ehtesham Abidi’s business interests. In the case of Muslim Congress, the officer’s are mere figureheads and it is largely controlled by Syed Abbas Aylyea who has a deep history of litigation and confrontation to take over Shia Centers and bring them in line with his pro-Iran narratives.

While Shia Genocide was at its peak in Pakistan and while Shias were being slaughtered and massacred across South Asia, West Asia and North And Central Africa, these organizations achieved nothing.

It seems that they the only thing that these organizations can do is fight with and malign each other while wasting millions of dollars of community funds in frivolous and avoidable lawsuits. Yes, they do seem to coordinate competing conferences on the same exact date.

Collectively, both organizations represent the most xenophobic and ill-informed views of local and international politics. Their insular and bigoted approach to crucial domestic and foreign policy issues is an embarrassment for North American Shia Muslims.

The essence of Shi’a Islam is moderation and intellectual endeavor; both of which are missing amongst the power hungry and deeply politicized faith organizations that claim to speak for Shia Muslim of America.

Of course, there are exceptions. But these exceptions cannot hide the fact that North America desperately needs a more honest perspective on Shia Muslims than that being provided by the existing organizations.